This post comes to us from API’s own Holly, who recently accompanied our high school study abroad students to the Discover Britain at Harlaxton College program. You can learn about the program here.

I took a train to Grantham – a small town in Lincolnshire. Now that I have been living here for almost 2 weeks, I thought you all might to learn a bit about it. Situated 2.5 miles from Grantham is Harlaxton Manor.

It was built in the 1830s for a man named Gregory Gregory (yes, really), primarily in the Elizabethan style. There isn’t a whole lot known about Gregory Gregory – he was unmarried, had no children, and if he had any journals or writings of that sort, they have been lost to history. 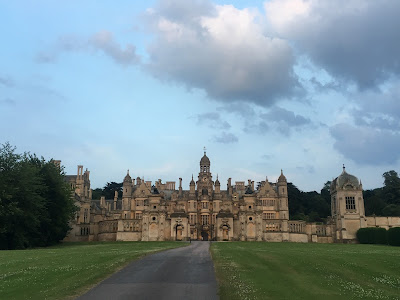 In the 17th-19th centuries, it was common for young people of wealth and status to go on what is known as the “Grand Tour”, where they would travel through Europe and buy art, commission paintings, practice languages, engage with the upper class of society, study local culture, visit historic places, etc. Imagine a backpacking trip of today undertaken by the richest of society.  Some of these grand tours are what caused major artifacts and art pieces from Italy, Germany, France, etc. to end up in Britain and British museums instead of their local areas.

Gregory Gregory amassed a large collection which was later known as the “Gregory Heirlooms”.

Upon his death in 1854, the estate passed to his cousin George Gregory, who passed away 6 years later. It was inherited by John Sherwin, who did not get along with Gregory Gregory, and he had to take on the name Gregory in order to inherit it – becoming John Sherwin Gregory. Upon his death there was contention about who was to inherit the estate, which led to a famous court case that is still studied in estate law today – the “Gregory Heirlooms Act” in 1877, which ruled about the differences between fixtures and fittings – items that can be removed from a room/house and items that are part of the architecture and cannot. One family received the manor and fixtures, the other received all of the fittings.

The Pearson Gregory family owned the manor beginning in 1892. During World War I, the area around the manor was used as a training ground for trench warfare and for training the newly created Royal Flying Corp/Royal Air Force and Machine Gun Corp.

By the 1920s and early 1930s, however, the estate was left fairly disused, neglected, and scheduled to be demolished. In 1837, it was featured in advertisements in The Times and Country Life magazine asking for someone to save the manor and it caught the attention of wealthy and eccentric Violet Van der Elst, who purchased the manor for £78,000.

Violet was an interesting woman, who was instrumental in the campaign to abolish the death penalty in Britain. She was an occultist, holding seances in one of the rooms here to try to communicate with her late husband, and she wrote/published a book of ghost stories.  She is responsible for bringing electricity and running water to the manor, as well as adding a number of decorative features including the grand chandelier in the Great Hall. 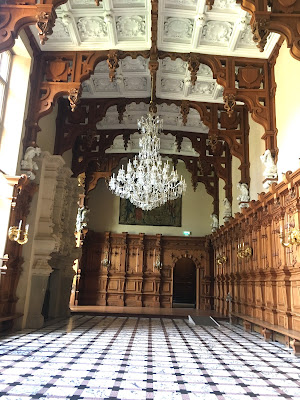 The chandelier is 10 ft at its widest and must be cleaned by hand every three years. It takes 3 people a week to gently remove, clean, and replace each piece of crystal.

During World War II the estate was again used by the British military, housing units of the First Airborne Division. In March 1944, King George VI came to the manor to visit the troops and inspect some of their equipment. Apparently, Violet Van der Elst did not like the airmen too much and trained her herd of Shetland ponies to bite them when they would pass by.

Although the First Airborne didn’t see action on D-Day, they later fought and their numbers decimated at Arnhem – the subject of the film A Bridge Too Far.

The only memorial to this division in the UK is Harlaxton’s Pegasus Courtyard. 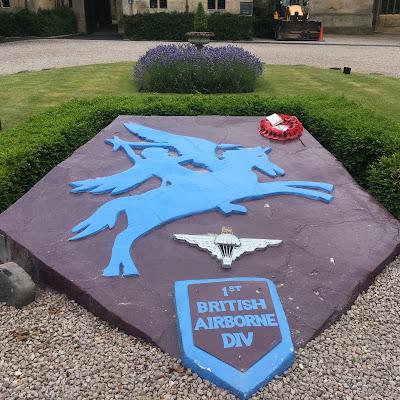 In 1948, Violet Van der Elst sold the manor to The Society of Jesus and the Jesuits used it as a seminary of sorts. The Great Hall became their chapel.

In 1965, the Jesuits began leasing the building to Stanford University to be their study abroad campus but they later moved to Oxford. The University of Evansville began leasing it in 1971, then in 1978 a trustee of the university bought it for £100,000 to leave to the university, then he gave it to them outright in 1987.

Below are some photos from around the place: 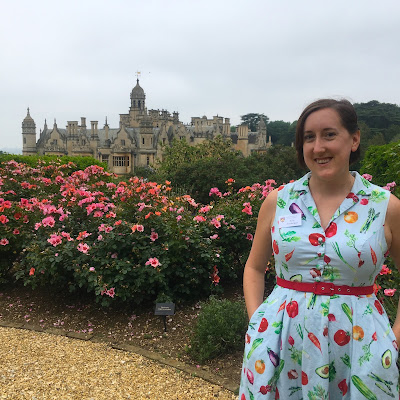 View of the manor from the Italian gardens.

View of the front courtyard and wall, with the drive visible It is almost a mile to the front gates of the manor. 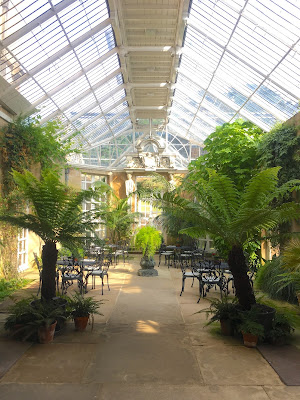 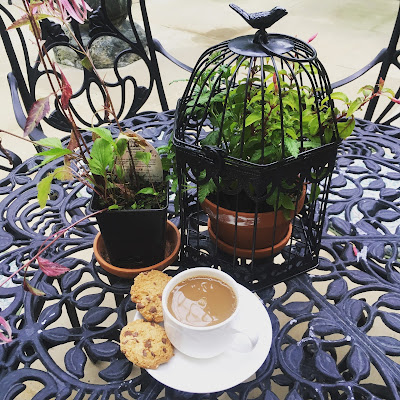 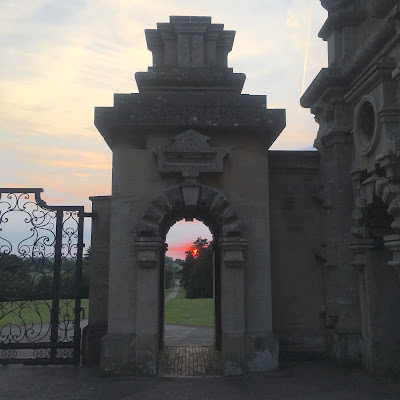 The manor faces west, so you get great views of sunsets. 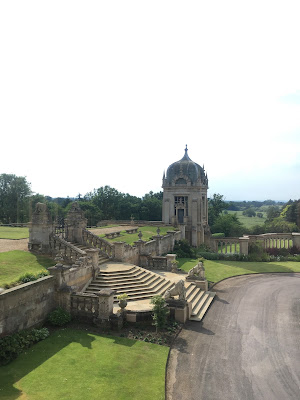 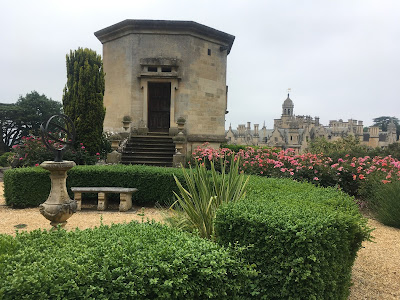 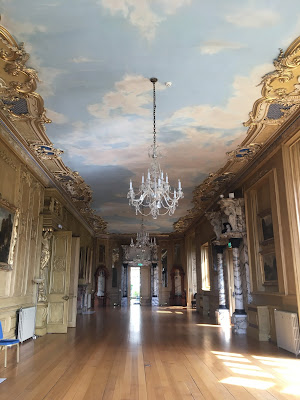 The Great Hall – the sides look like wood panels but the wood effect is actually hand painted and a specialist has to come in periodically to do repairs when it gets scratched/damaged. 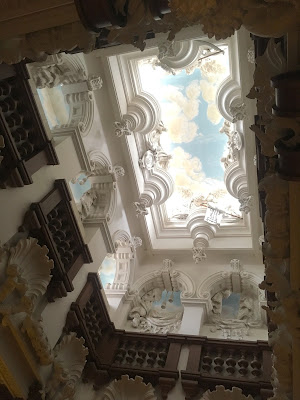 This ceiling is interesting because you cannot actually get up to the upper levels, so it is a bit of an optical illusion. It is all plaster and apparently if you look in the windows from the outside, only the areas visible from the stairs are decorated because behind them it is all plain because they knew people wouldn’t be able to get up there to walk around and see the backs of pillars, statues, etc. 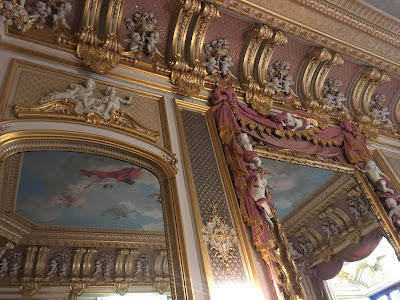 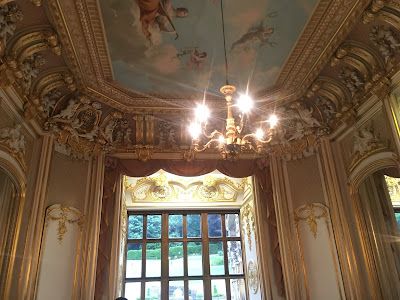 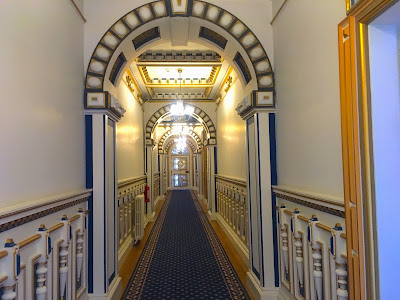 The 1999 film The Haunting was filmed at Harlaxton and ITV series Victoria did some filming here at the manor in May.
There are many more beautiful rooms and things to explore at the manor, but in the interest of brevity and my time, I leave with the above and Google can show you more.

END_OF_DOCUMENT_TOKEN_TO_BE_REPLACED

END_OF_DOCUMENT_TOKEN_TO_BE_REPLACED
We use cookies on our website to give you the most relevant experience by remembering your preferences and repeat visits. By clicking “Accept”, you consent to the use of ALL the cookies.
Cookie SettingsAccept
Manage consent